Okay, we're back from vacation, so no more slacking on blogging or clean eating.  I have to admit, I did indulge in a Philly Cheese Steak while we were away.


On Tuesday night I decided I wanted to do a meatless meal since I had taken the The New Moosewood Cookbook out from the library.


I decided on Scheherazade Casserole and was not disappointed!
Here's my version of the casserole

ONE: Preheat oven to 375 degrees.
TWO: Lightly oil a 9×13 baking pan. Set aside.
THREE: Place bulgur in a small bowl with the boiling water. Cover and let stand for at least 15 minutes.
FOUR: Meanwhile, heat the olive oil in a large skillet. Saute the onion, garlic, salt and seasonings over medium heat for 5-8 minutes. Add pepper and cook for 5 more minutes. Remove from heat and set aside.
FIVE: Place beans in a blender with 1 cup of fresh water. Grind until it resembles a coarse batter.  I would start with 1/2 cup of water and add more gradually, since mine was so watery from adding the entire cup first.
SIX: In a large bowl, combine bean puree with the soaked bulgur and sauteed veggies. Stir in the tomatoes, tomato paste, parsley and 1 cup of feta. Mix well.
SEVEN: Spread the mixture into the baking pan. Sprinkle the remaining cheese on top. Cover and bake for 30 minutes.
EIGHT: Uncover and bake for another 15 minutes, uncovered, at 350 degrees.
This isn't my photo - I found it elsewhere on the WWW, since the casserole was so delish that we ate it all before photos!  oops!!! 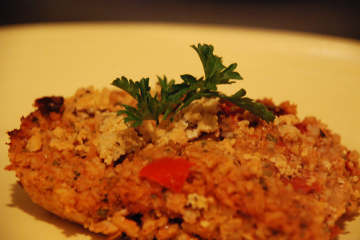