I really strive to eat well when I'm working.  It's hard because it's such a high stress environment and there's always junk laying around.  The other night there were two bags of chips, two boxes of danishes and a box of timbits.  I did break down and have one or two plain timbits, but at least they were plain and not sugar coated.

This morning I was trying to meal plan for tomorrow at work and realized that I don't have a ton of stuff, so was trying to figure out what I could possibly pull together with what we had laying around.  What I came up with was so incredibly delicious.  I was pleasantly surprised.


Crustless Quiche
ONE: Preheat oven to 400*.  In a heavy pan (I used cast iron), heat the olive oil on medium until shimmering.  Add onions and cook for 3-4 minutes and then decrease heat to low.  Cook onions for approx 20 minutes or until golden brown.  Add in the artichoke hearts and greens.  Saute until the greens are wilted, about 5 minutes.
TWO: In a bowl, whisk together the egg, egg whites, cayenne and salt and pepper.
THREE:  Spray pie plate with cooking spray.  Add the cooked veggies and feta to the sprayed plate.  Pour in the egg mixture.  Try to make sure that everything is covered by the eggs so it doesn't burn. 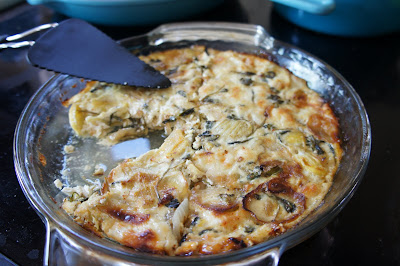