We've been knee deep in peaches here.  They're so sweet and juicy this year, so we went to the market and bought 40lbs worth of peaches.  Yes, 40lbs.  So what do you do with 40lbs of peaches? You make jam of course!  So it was certainly an interesting task to make a cleaned up version of Peach Jam, but it turned out to be a very successful venture.

I stumbled up a great book by Liana Krisoff called Canning for a New Generation.  She uses green apples and citrus to help the jam set rather than using pre-packaged pectin that contains chemicals.  I liked this.  I also like that she uses honey rather that sugar when it compliments the flavors of the fruit.  The peach jam calls for sugar, so I used evaporated cane juice instead and it turned out perfectly fine. 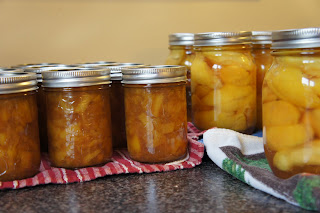 Makes 5 - 250ml jars
Ingredients:
ONE: Prepare for water bath canning.  Have a large pot with enough water to cover the jars by 1" ready and heated up so you don't have to wait when it's time to process the jam.  Sterilize the jars - I do mine in the oven.  Set it to 225* and leave the jars and lids in for 10 minutes then turn the heat off.  The jars are sterile when you need them.
TWO: Peel the peaches.  Bring a large pot of water to a boil and fill a large bowl with ice water.  Drop 3-4 peaches into the boiling water and leave in for 1 minute.  Transfer to the ice water.  When they are cool enough to handle, peel the peaches, remove pits and dice.
THREE: Core the apples and cut into quarters.  Tie up the cores in a cheesecloth bag and set aside.
FOUR: Put the peaches and evaporated cane juice in a pot (I use an enameled cast iron).  Bring to a simmer, stirring frequently and cooking until the juices just cover the peaches.  Pour into a colander set over a large bowl and stir the peaches to drain off the juice.  Return the juice to the pan along with the apples and cheesecloth bag and bring to a boil over high heat.  Boil, stirring occasionally until the syrup is thick and reduced, about 15 minutes.
FIVE: Return the peaches and any accumulated juice to the pan along with the lemon juice and bring to a simmer.  Stir frequently until the peaches are very tender, about 15 minutes.  Remove from the heat and remove apples and bag.  Stir to distribute fruit.
SIX: Ladle the hot jam into the jars, leaving 1/4" head space at the top.  Put a flat lid and ring on each jar and adjust until finger-tight.  Put the jars in the canning pot, making sure that the jars are covered by at least 1" of water.  Remove the jars to a folded towel and do not disturb for 12 hours.  After 1 hour, make sure that the lids have sealed by pressing down on the center of each.  If it can be pushed down, it hasn't sealed and should be refrigerated.